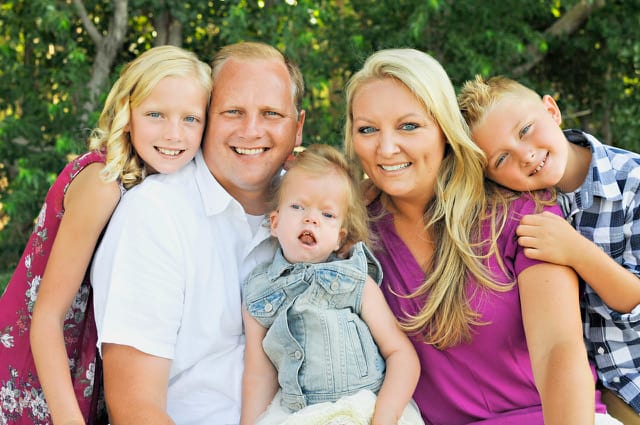 Saturday, June 8, 2013 was a big day for the Andersen family. We were all so excited about the birth of our new baby! At 11:35pm, I gave birth to a beautiful baby girl. I waited for the cry, it didn’t come at first, but eventually she let out a quiet grunt. The nurses cleaned her up, then let me hold her for a minute before telling me that she needed to go to the NICU to be monitored. My husband, Jade, left with the baby and luckily, my mom and sisters were in the delivery room to help calm my jitters. After checking my vitals, I was allowed to go see my baby. Avery was hooked up to many machines and there was a big mask on her face. It was soon apparent that she would be staying in the NICU much longer than first expected.

The next morning, one of the neonatal doctors sat my husband and I down to tell us that our newly born daughter had signs of Down Syndrome. They explained to us that she had low set ears, a bilateral simian crease, overlapping toes, and a different shape to her eyes which were all consistent with Down Syndrome babies. It was a shock, but we felt that it was a challenge we were able to take on. One day later we were told that she did not have Down Syndrome. During our daughter’s two weeks in the NICU, she had many ultrasounds on her kidneys, brain, heart, and lungs. She also had X-rays, an MRI, a VCUG, and hearing tests. The microarray for deletions and additions to her chromosomes came back normal. Everyone was confused and as they searched for answers they continued to test Avery, trying to identify what she had been born with.

While all this was going on, Avery was able to come off of the CPAP machine and fought hard to transition to a low flow oxygen cannula. We spent a lot of time with an amazing occupational therapist trying to get Avery to eat. We were finally able to get her to meet her nutritional needs with a Pigeon Nipple which was created and used for babies born with a cleft palate. We left the hospital two weeks after Avery’s birth with no answers to a diagnosis, but a long list of follow up appointments. We would soon learn, through her many tests, of Avery’s diagnoses of urinary reflux, hydronephrosis, hydrocephalus, brain anomalies (including a thin corpus callosum, no septum pellucidum, and large ventricles), an ASD, a PDA, hearing loss, and respiratory distress.

We were so excited to be home, even if it meant that we had to carry around an oxygen tank and a heart monitor. Avery was such a sweet baby and loved snuggling with her mom. It took a while for her to adjust to our loud home with a 3 and 5 year old, but she seemed to get used to it and fell in love with her older siblings. When Avery was one month old, we started having occupational therapy services once a week and home nursing services every other week. We mainly worked on gaining weight and eating. Eating was not easy for her, we spent anywhere from 8 to 12 hours a day getting her to eat 12 ounces of pumped breast milk a day. It was hard and stressful for her and the person feeding her.

In July, we met with a geneticist and he said he was not certain of her diagnosis and wanted to give her some time to grow up. He did mention that she showed signs of a very rare syndrome called Schinzel-Giedion Syndrome, but that it was in no way a definite diagnosis. I googled Schinzel-Giedion Syndrome (SGS). At that time, there was very limited information on the internet about SGS. There was no day to day information and no idea of what living with a diagnosed child would be like. The information that I did read told me that my child would not live long and that she would be sickly throughout her life.

In August, we noticed that Avery would tense up and stretch her arms wide, holding them out, and not breathe for short periods of time. We were sent to spend a few days in the Children’s Hospital and had an EEG conducted. Avery was having seizures. We spent the rest of her life giving her seizure medication to keep them at a minimum.

Soon after her seizure hospital stay, Avery was diagnosed with urinary reflux. With all that was going on, Avery was starting to get kidney infections. We spent a couple days every month in the hospital giving her antibiotics and IV fluids to help her get through the bad days of her infections. We grew to love the staff at the hospital. We teased that Avery would come in just to see her friends. Nurses would hug me as we entered and then sit and rub Avery’s head for hours cooing at her.

In the spring of 2014, Avery got her first scary respiratory infection. She had parainfluenza. She couldn’t eat anything for fear that she would aspirate. The doctors talked with us about options, but they told us that it was probably a good idea to place a feeding tube in her nose for the next little bit to help get her strong enough to go home. I had been pumping every three hours to give Avery my breast milk, but unfortunately I was not able to produce enough for her. Formula is much harder on the lungs if aspirated and so we decided to give the feeding tube a try. This was the best decision we ever made. Our daughter started to really have a personality. She started smiling, she started tracking us, she was awake more often, and she just seemed happier. She had been using all of her energy to eat. We took her home with the feeding tube and a few months later, we placed a G-tube.

At nine months old, Avery was diagnosed with Schinzel-Giedion Syndrome, one of less than 100 children ever in the world. Only a few SGS children live past the age of two. We met with many amazing people to create a Physician’s Order for Life Sustaining Treatment (POLST) for our daughter. No parent should have to do this, but at the same time, it helped us decide right then and there that we were going to allow our little girl to live a wonderful life, no matter how short it was.

During her short life, she was completely non-verbal, non-mobile, and was under the care of eleven specialists. Avery had many hospitalizations and surgeries, but despite it all, she was our happy baby. She communicated her happiness with big smiles and eye rolls, which were our favorite! She enjoyed being around her family and friends and her favorite sound was laughter. We tried to live each day as if it were a gift, because it truly was. Avery learned to use a button to communicate at school, she could tell her siblings yes or no by touching their hand, and she mastered waving while in preschool with her awesome technicians and nurse. Avery was the reason her mom got to go on two helicopter rides, always had slobber on her shoulder, became unphased by getting pooped on, learned many medical terms, and found out that no matter how tired you are, a sleepless night holding your wide-awake child is one of the best memories you will ever have.

Avery had a seizure that caused her to aspirate and go into cardiac arrest on her first day of kindergarten on August 21, 2018. The loving hands of her nurse, the school staff, and the ambulance crew were able to get Avery’s heart pumping again. By the time I got to her school, things looked great and we joked that she just wanted to get out of her first day of school. However, ten minutes later her heart stopped, after a few more minutes of CPR, I asked the emergency workers to stop. We brought my older children into the ambulance to say goodbye. It was then, when my kids were telling her how much they loved her that her heart started pumping again. We were life flighted to the Children’s Hospital where we spent two long days making very hard decisions. We took Avery home on August 23 on hospice care. She gave us three wonderful days filled with tears, smiles, cuddling, memories, family, and friends. She passed away on Sunday, August 26 surrounded by so much love. Avery was loved by many. She was a rare gift. We are so lucky to call her ours.