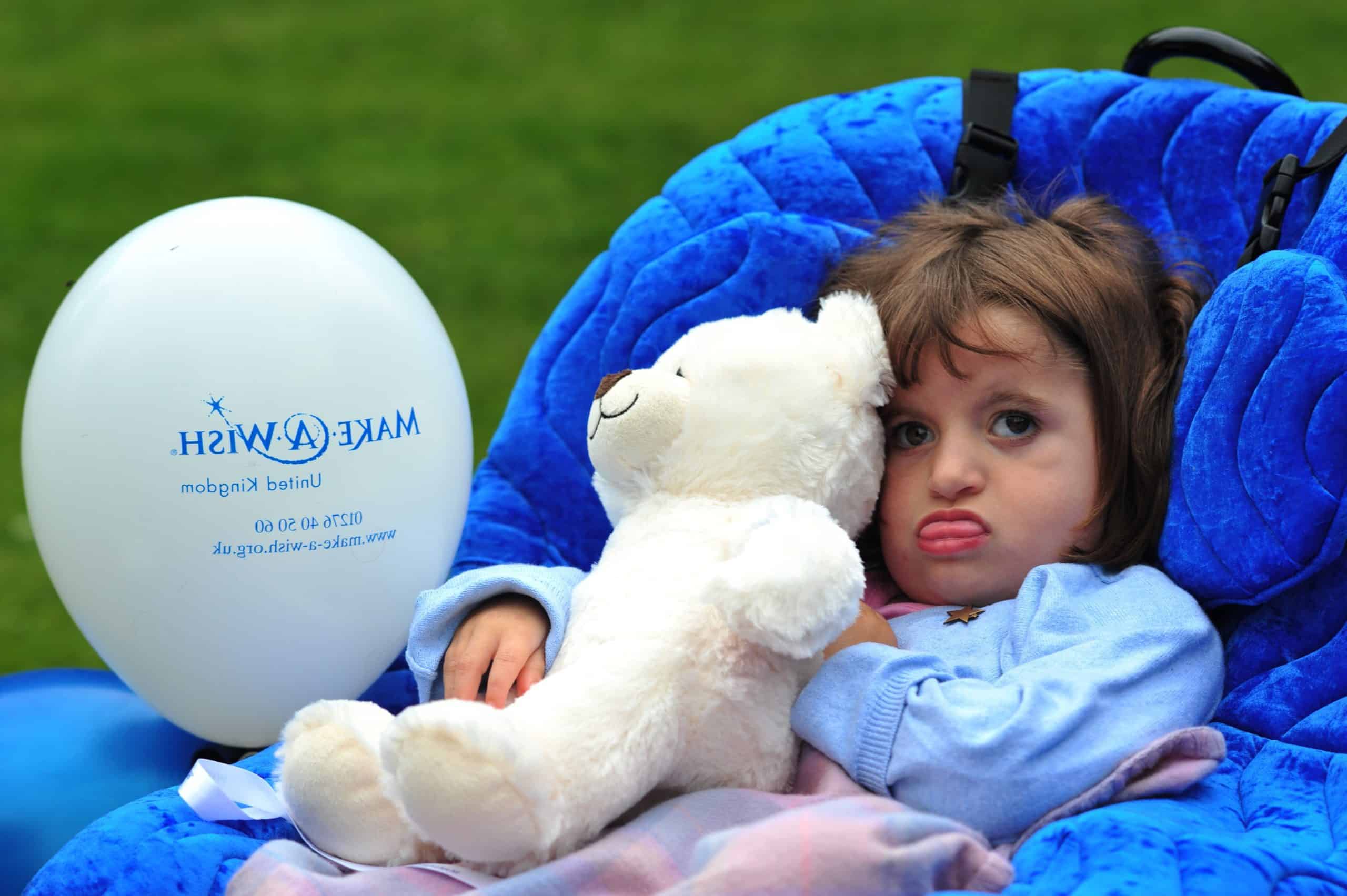 In this photo: Ophelia

Schinzel-Giedion Syndrome is a very rare genetic disorder arising from mutations in the SETBP1 gene.

In this photo: Ophelia

Schinzel-Giedion Syndrome (SGS) is a very rare genetic disorder arising from mutations in the SETBP1 gene.

The SETBP1 gene is located on chromosome 18 and contains the instructions that the body needs to produce SETBP1 protein. SETBP1 protein appears to play an important role in the developing embryo, predominately in ensuring that the brain develops normally.

The SETBP1 protein play another important role in the developing embryo, as a ‘DNA-binding protein’. This means that it is responsible for turning on and off other key genes during embryonic development.

More research is needed to fully understand the function of this important SETBP1 gene and the protein it produces.

SGS is caused by mutations occurring in a specific ‘hotspot’ region of the SETBP1 gene that codes for a degron. The degron is an important component of a protein molecule, as it regulates protein degradation rates (i.e. speed of protein breakdown) in the cells.

Protein degradation prevents old protein molecules from accumulating in cells and causing ‘toxicity’. In a normal situation, the amount of SETBP1 protein in cells is tightly controlled by constant formation of new protein and breakdown / degradation of old protein.

Therefore it follows that as a consequence of the type of mutations that cause SGS (i.e. mutations affecting the degron), the SETBP1 protein levels build up in the cells because the protein is not able to be broken down. This is called a ‘gain of function’ mutation of SETBP1.*

It is thought that the increased SETBP1 protein levels result in disruption of normal embryonic development in a number of different organs including the brain, where the protein build-up is thought to have a harmful effect on the normal development and function of neurons (brain cells). This is important as children with SGS have severe neurodevelopmental delay and seizures as prominent features.

More research is needed to fully understand the impact that SETBP1 protein plays in brain development and epilepsy.

*‘Loss of function’ SETBP1 mutations have also been identified, which result in insufficient levels of SETBP1 protein in the cells and this causes a different genetic disorder called SETBP1 Disorder. The website for the SETBP1 Disorder patient organisation can be found here.

What is meant by “Classical” vs “Atypical” Schinzel-Giedion Syndrome?

Children diagnosed with “Classical” Schinzel-Giedion Syndrome have mutations within the 12 base-pair ‘hotspot’ region of the SETBP1 gene (see diagram). These children will have typical features associated with SGS (see section below) and have an average lifespan of 18-48 months.

Children diagnosed with “Atypical” Schinzel-Giedion Syndrome have mutations just outside but adjacent to the 12 base-pair ‘hotspot’ region of the SETBP1 gene (see diagram). These mutations are thought to have a smaller effect on the SETBP1 protein than the mutations within the hotspot. These children often have less severe features of SGS and may have a lifespan-extending beyond the average.

What are the recognised features (symptoms and signs) of SGS?

It is important to remember that not all children with SGS will exhibit all the reported features below and some may have other features not listed below:

More research is needed to help us understand and treat the symptoms such as epilepsy, kidney problems and cancer that seriously impact the quality and length of life of children living with SGS.

How is SGS diagnosed?

Whole Exome Sequencing (WES) – this test involves sequencing all the pieces of an individual’s DNA that provide instructions for making proteins. These pieces, called exons, are thought to make up 1 percent of a person’s genome. Together, all the exons in a genome are known as the exome, hence this method of sequencing them is known as whole exome sequencing.

WES allows mutations in the protein-coding region of any gene to be identified, rather than in only a select few genes on a gene panel. As most known mutations that cause disease occur in exons, WES is thought to be an efficient method to identify possible disease-causing mutations.

Whole Genome Sequencing (WGS) – this test determines the order of all the nucleotides in an individual’s DNA and can detect mutations in any part of the genome. This can be important as researchers have found that DNA mutations outside the exons can affect gene activity and protein production and lead to genetic disorders. These types of mutations outside of the exons would not be detected by WES.

*Note: Even though WES and WGS have the power to detect many more genetic mutations
than select gene sequencing, the significance of much of this information revealed by WES or WGS is unknown. This is because not all genetic mutations affect health and so it is difficult to know whether identified mutations are involved in the patient’s condition.

One of the most important questions for couples with a child diagnosed with Schinzel-Giedion Syndrome is to understand what is their risk of having another child with the same disease this is known as “recurrence risk”.