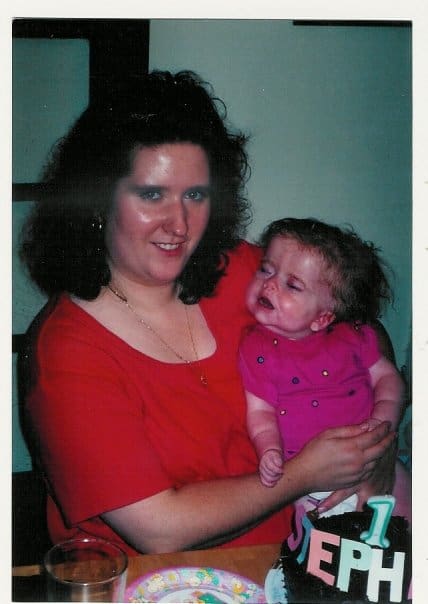 Just before our first daughter’s second birthday in September 1999, our second daughter Stephanie was born. It was a normal pregnancy with a Sept. 3rd due date. I went into labor on Sept. 9 and delivered at 10:02 p.m. Her APGAR scores were low, but there was meconium and the cord was wrapped around her neck so we didn’t know there was anything genetically wrong at that point. They never brought her to me in the delivery room, but my previous delivery had been a C-section so I wasn’t missing the baby-on-chest experience specifically. My husband says everyone was eerily quiet in the delivery room, like they knew something was wrong. I was too exhausted and surprised by the ‘drama’ of the vaginal delivery to really notice their reaction. They whisked her off to the NICU before I really knew what was going on.

Stephanie spent 10 days in the NICU, labeled as ‘low muscle tone’ with inability to suck (fed primarily with an NG tube as I desperately pumped breast milk, driving the 40 minutes back and forth to the hospital daily). We worked with her using different bottle nipples, including one I could squeeze to assist her. It was a frustrating and time-consuming task, but I was determined. We consulted with a geneticist who suggested a couple of possible syndromes (Prader-Willi and others… but not Schinzel-Giedion) that she might have. Reality began to set in that our baby was going to have on-going trouble. After 10 days she had gained enough weight and was getting enough milk in by mouth that they allowed us to take her home, without a diagnosis.

At home, I was the only one who could get any milk into Stephanie. I had to feed her every 3 hours around the clock, with each feeding taking 1.5-2 hours. Needless to say, I was completely sleep-deprived and kind of losing my mind. My helpful, highly-verbal two year-old learned to hold and turn the pages of her books so I could read to her hands-free while I used both hands to feed her sister.

When Stephanie was a month old, our pediatrician opted to have her hospitalized for failure to thrive. I took this personally as my failure to get enough milk into her. But later I realized it was actually a brilliant plan to get all the specialists to come to her rather than it taking months to get appointments with a neurologist, a gastroenterologist, a urologist, and another geneticist (at the other hospital our pediatrician worked through). Our pediatrician got us ‘samples’ of a very expensive human milk fortifier that we added to breast milk to try to get her weight up. 5 days later we were on our way home with some improvement in her ‘thriving’, and a few more answers about her malformed kidneys, abnormal brain development, etc., but still no diagnosis.

At about 2 months old I noticed Stephanie’s arms stiffening and jerking toward center. This was labeled ‘infantile spasms’ by the doctors and was the beginning of life-long seizures. We got her on phenobarbital to start, but never did get the seizures under control with various medications. Stephanie also had frequent urinary tract infections. I could always tell by the color and odor of her urine that she had another UTI.

At 2.5 months old, we received the diagnosis of Schinzel-Giedion Syndrome. We were devastated, struggling with acceptance. As it tends to do when you have children to take care of, life continued. Feeding took up a lot of it. When Stephanie was 5 months old, with feeding getting harder not easier, we approached our pediatrician about the ‘medical necessity’ of a feeding tube. I did not want to do it just to make my life easier, or to give up too easily if she could eat on her own. The doctor agreed that the G-tube was a medical necessity to properly feed Stephanie without so much struggle, so we got it put in. This truly was the best decision for Stephanie, for my sanity, for 2.5 year-old Rachel to ‘get her Mom back’, and for our family as a whole.

We had physical and occupational therapy come to the house weekly, and also joined the ‘baby group’ at our local public school’s Early Intervention Program. Although no one else’s child had the same rare diagnosis (many had no name for their child’s condition), it was helpful to connect with other parents and realize that we were not alone in our experiences with a special needs child.

When Stephanie was a year old, she had a temperature so high she had to be hospitalized. The doctors were preparing us that we probably wouldn’t take her home. An MRI showed that about 1/3 of her brain had disintegrated and was replaced with fluid. They said that her brain was losing the ability to control her body temperature. Amazingly she rallied and we were able to take her home. The nurses connected us with Hospice. Weekly visits by a Hospice nurse and sometimes a social worker were a great blessing to us. These caring ladies became family friends. Volunteers would come sit with Stephanie one morning a week while I went to a Bible study and my husband (self-employed) worked upstairs.

Stephanie had solid days of crying when nothing comforted her. Too much touch seemed to overstimulate and aggravate the situation, so often I just had to steel myself and try to carry on with life in some form while she cried. The Hospice nurse adjusted meds to try to calm her and relieve any pain we didn’t know the source of. Stephanie began to throw up her bolus tube feedings frequently, so we had to get a pump to put the liquid in slowly. This helped but did not completely eliminate the vomiting. She had trouble dealing with her secretions. We got a suction machine, which helped reduce the gagging. Stephanie never reacted obviously to visual or auditory stimuli, so we were never sure if she could see or hear. Later Stephanie’s oxygen saturation was not high enough on room air, so we got an oxygen machine for home and portable tanks for away from home.

Stephanie began to deteriorate as she approached 2 years old. She developed bed sores on her head from lying/resting on it all day (her head was very heavy and she never held it up at all). UTIs became more frequent. She needed more oxygen. More morphine and seizure meds. On November 5, 2001, at 26 months old, Stephanie passed away quietly in her sleep. Her Dad found her early that morning, cold in her crib. Our precious girl had finally been healed, by God taking her to heaven. We called Hospice and they called the funeral home to come get her body. Hospice staff came and helped our 4 year-old, and us, process the loss.

Friends and church family helped us organize a beautiful evening funeral service for Stephanie at our church. Many people from our extended families, out of town friends, church family, and people who helped us care for Stephanie came to the visitation and funeral. The next day we had a graveside service and buried her in the Babyland section of a local cemetery. It was a difficult but nevertheless precious time with family and friends, celebrating Stephanie’s going to heaven.