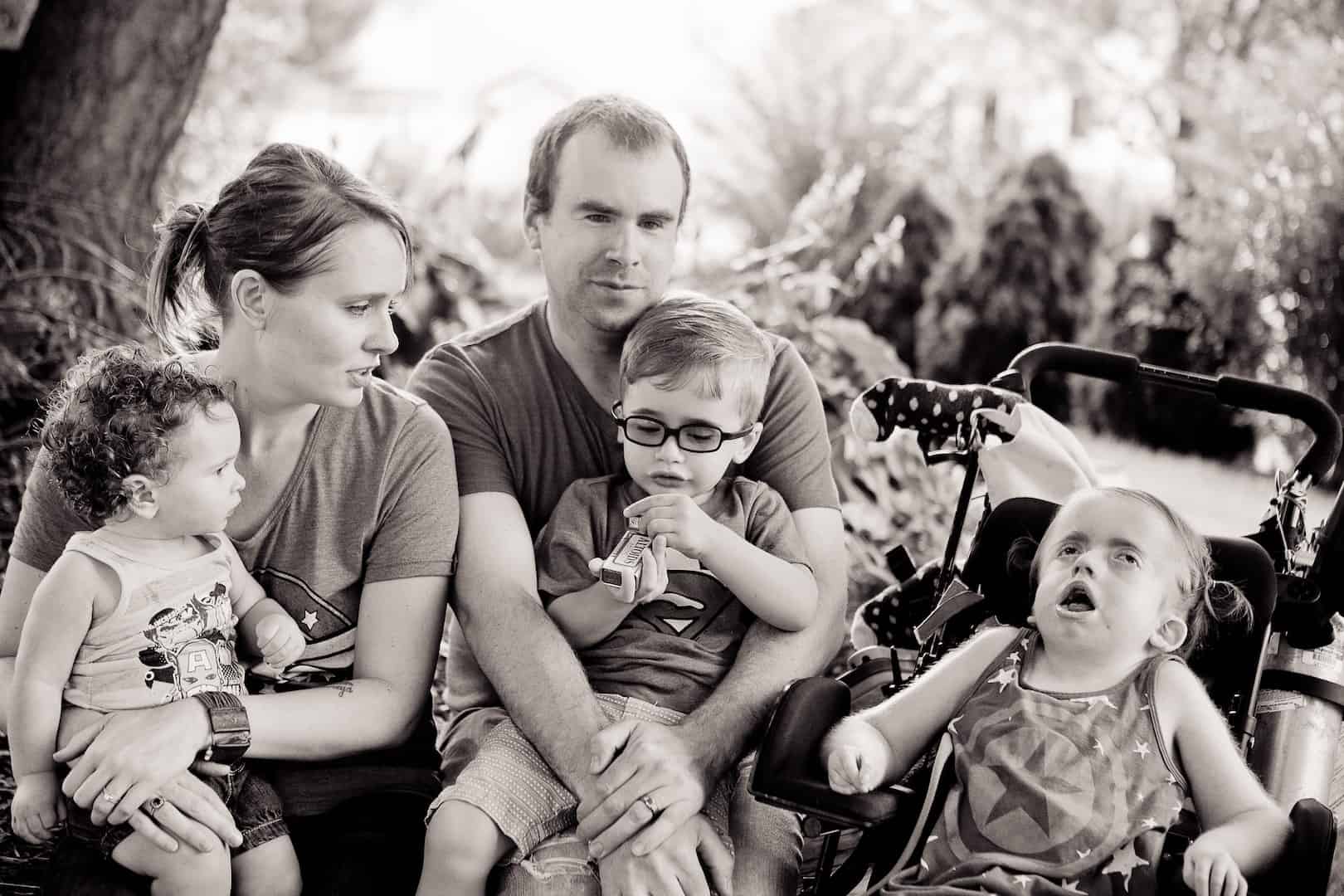 Our journey began 20 weeks into my pregnancy. Abnormalities were noted from the first ultrasound and our baby girl, whom we named Scarlet, was watched closely from that point on for the duration of her life. After 24 hours of labor Scarlet was born on September 2nd, 2009 in Minnesota, USA. When she arrived, she made no sound. We were given a moment to see her and take a picture before she was rushed away to the neonatal intensive care unit.

The next few months of Scarlet’s life were full of fear and confusion. Symptom after symptom began to appear including kidney disease, respiratory problems, feeding concerns and aspiration, seizures, and a host of physical abnormalities. No physician at any hospital had any idea what she had and the list of specialists grew rapidly. It continued this way for 3 ½ years with many health crises nearly ending her life, but no answers other than the hypothesis that her condition was likely neurodegenerative and terminal. Finally, after a lucky guess by a geneticist at the Mayo Clinic, we got the diagnosis of Schinzel-Giedion syndrome, and were given the devastating life expectancy of 2 ½ years.

By the time we received a diagnosis, we had over a dozen specialists, homecare nursing for 16 hours per day, and 4 hospitals, which we traveled between. Scarlet was deaf and severely visually impaired, she did not produce tears which caused corneal damage, suffered from seizures, dystonia, dysautonomia, respiratory distress, kidney disease, hypertonia, brittle bones, and no ability to move her own body except for stretching and very small movements. She was wheelchair bound and completely dependent for all of her cares. By that age she had already had more surgeries than I can count ranging in severity. They included an intracranial shunt placement, port-a-cath, g-tube, ureter shunt, vesicostomy, pylostomy, pin placement in one foot and serial casting, sedated dental exams, and hernia repairs.

At home we created a mini intensive care unit for Scarlet in our basement. She had all of the necessary equipment to sustain her along with nurses to support her. She regularly used a bipap, oxygen, suction, cough assist, an oximeter monitor, vest machine, blood pressure machine, and an arsenal of medications. As she grew and her health concerns continued to escalate, the list of daily procedures and medical interventions also grew. Chronic UTI’s gave way to catheterization multiple times per day. An inability to clear secretions from her lungs meant respiratory treatments 4 times per day. Hypertonia, a curving spine, and slowly displacing hips required daily physical therapy, stander time, a specialized wheelchair and various hand and feet orthotics.

As a family our biggest concern, other than Scarlet’s health, was the emotional wellbeing of us as a whole and as individuals. Living life within the confines of Scarlet’s very rigorous schedule was grueling and terrifying. Fear often dictated our decisions and our ability to participate in the world. Finding balance was difficult, but over time we grew to accept our life, -though it was challenging, we were happy. Scarlet passed away from a virus and a weakened immune system after a year and a half of receiving hospice care. She was 7 ½ years old. We were devastated to lose her even though we had always known the day would come.

During her life she fought like a warrior and crushed the odds placed against her. We do not take for granted how lucky we were to have had 7 ½ years. We cherish our memories of her magical smiles, her love for all lights that crossed her path, her feisty spirit, her hugs and cuddles, her flare for being snazzy, her flashy nails, and endless pairs of shoes. I can’t imagine our lives without having had her in it. Scarlet changed all of us for the better. Perhaps the biggest lessons we learned came from facing Scarlet’s mortality. Unexpectedly, we discovered how to live each day, not like it is our last, but like we will all live forever. Because the moments that make life worth living are not in the special occasions but in the everyday moments that are special.