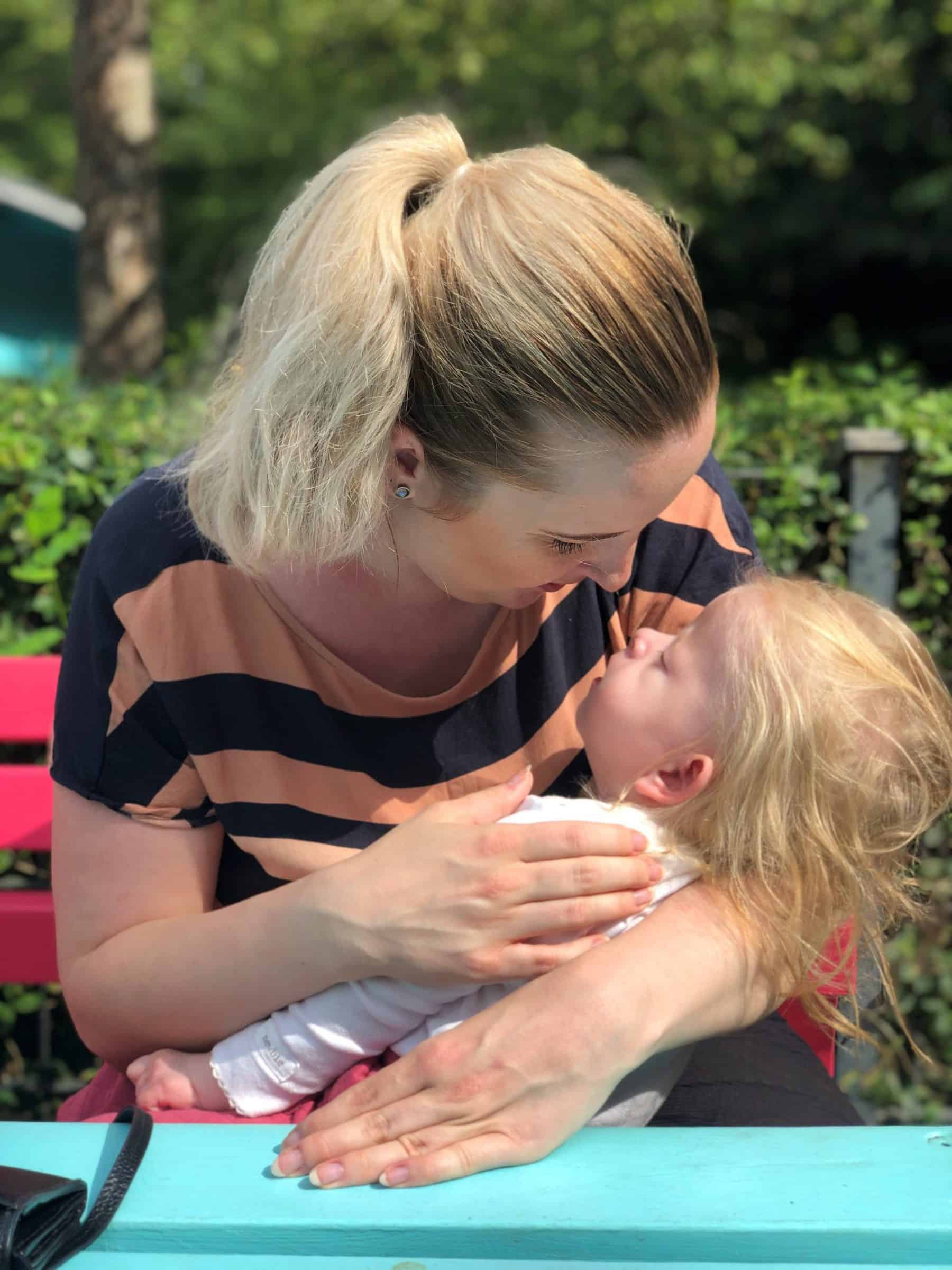 On February the 2nd 2018 we became parents for the very first time. A beautiful little girl with a lot of hair. But the story of Emma begins before she was born.

Kasper (Emma’s dad) and I have been together since the summer of 2014. In the summer of 2017 we were at that stage of our relationship where we felt ready to grow our family. I quickly got pregnant and we were so excited. All the checks and ultrasounds done in the first 20 weeks of the pregnancy went well. Everything was fine and we found out we were expecting a girl. We already had a name: Emma.

Around week 23 of the pregnancy things changed. I remember waking up one morning feeling as if my baby pump had doubled in size. But I was so proud of being pregnant I didn’t think any more of it. Shortly after this I went for a routine check with my midwife, and she told me that she felt I had a little too much amniotic fluid, but that I would just have to go about as normal. I got worried and arranged for an extra ultrasound the next day. This all spiraled into 3 extra ultrasounds during the following days, the last of which was with experts in the biggest hospital in Denmark. They told us that our baby had something called hydronephrosis (enlargement of the renal pelvis) but they felt confident it was nothing serious. They did want to keep an eye on it though, so we had scan’s every 2 weeks until Emma was born.

On February 2nd, 2018 she was here! Born 2 ½ weeks early, but such a beautiful girl with a lot of hair. However, the birth was hard on Emma. Her heartbeat dropped before she came out, and when she did come out, she did not breathe and needed oxygen right away. There were so many doctors and nurses in the delivery room when she was placed in my arms. I was only able to hold her for 20 seconds before she turned greyish and needed more oxygen. They took her away from the delivery room to the neonatal section to put her on CPAP to help her breathe. The first time we clearly saw our little girl, she was covered in tubes and the nurses and doctors were working so hard to keep her safe and well. At that time, we were not sure if she would survive.

We were hospitalized for the first 2 weeks after Emma was born. Emma was not able to breathe on her own. She could not breastfeed but was able to take small amounts by bottle and got the rest of her daily feed by nasal tube. The doctors quickly began to wonder if there was something else. They wanted to test her genes, because of her facial features, all of her hair, her kidney issues, low-set ears, breathing problems and her difficulty eating. We agreed to the tests but were so scared. During the two weeks we were hospitalized Emma went through many tests and examinations: daily blood samples, ultrasounds of her heart, brain, lungs, kidneys and liver. She had an MRI scan and even her eyes were examined. We were first time parents, and I don’t think we even realized what we all went through until many months later.

We told one of Emma’s doctors how scared we were for the results of the genetic test. He told us to take a deep breath and said, “sometimes when doctors hear the sound of hooves, they think it’s zebras, but most of the time it is horses.” However, we would soon learn it was something else.

During the two weeks in the hospital Emma fought to get off the CPAP. She made feeding progress and was able to take a bit more from the bottle, though she needed to eat every three hours to make sure she got enough calories to gain weight. She was getting my milk, and so I would pump every three hours hour too – night and day. The hospital agreed to let us all go home but to return 2-3 times per week to measure Emma’s weight gain. We were discharged to finally go home and start the family life we had hoped and planned for.

The first test of Emma’s genes, the micro-array, came back without any findings on the chromosomes and we were surprised to say the least, but also very happy. I think that we were in denial for a long time. We were convinced she was premature and that she would catch up as she got older.

Emma got off the nasal tube feeds and was taking her entire feed by bottle, although every meal took her 1 hour to eat and she was still eating every third hour. She did not gain weight fast enough and the doctors wanted to put the nasal tube back in. We were so determined to teach her to eat on her own, our entire day was centered around getting Emma to take the full amount.

All the examinations and tests had made Emma so uncomfortable around anybody else but her parents. She did not like to cuddle with anybody, except her mom and dad. Cuddling on us was her favorite activity and Emma and I spent hours and hours on our couch snuggling. When she had difficulty sleeping, I would place her on my shoulder, and she would almost immediately fall asleep.

When Emma was 3 months, she started to have episodes. She would stretch her arms, turn her head, her eyes would twitch and her upper lip would turn slightly blue. This would last around 20 seconds. We talked to one of the nurses who suggested it could be epilepsy. Once again, we were back to the pediatric section, and Emma had an EEG done. It showed epileptic activity in her brain and we were told that Emma would need to start medication. The doctors still suspected that Emma could have some sort of genetic disorder and they wanted to test for epilepsy syndromes.

On May 1st, 2018 we got the result. Something had been found and the doctors wanted us to give a blood sample the next day to see if we had the same mutation. They did not tell us more than that. We waited until May 15th, when we finally got the result. Emma was diagnosed with Schinzel-Giedion Syndrome and was now part of a group of less than 100 kids worldwide. She was not a horse, or a zebra – she is a unicorn.

Emma will never be able to talk, walk and run. She will always struggle with epilepsy, and her narrow airway makes her very vulnerable to colds and flus, which could be potentially fatal to her. She has hydronephrosis and has already had many urinary infections. Also, with the diagnosis came the toughest message we’d ever have to process, knowing that your child is not likely to live past the age of 2. No one should ever have to go through that.

Since Schinzel-Giedion Syndrome is caused by a genetic mutation, it is simply bad luck it happened to us and to Emma. The hardest part for us has been holding onto hope even though we know that there is no cure. We have accepted it and we focus on giving Emma quality of life her way. I think we kiss her 1000 times per day.

Until Emma was 4 months old, she managed to take all her daily feed by bottle. It was hard for her and it took her so long, but she did it. But then she started to throw up daily, sometimes 4-5 times a day. She could not keep the very small amount of milk in her, and she started to lose weight. Seeing pictures from that time she looks like a little baby bird. So tiny and with big eyes. After many discussions with Emma’s doctors, we decided to give Emma a G-tube, and in September 2018 Emma went to surgery to have the G-tube put in. It was such a hard realization that Emma would not be able to eat on her own, but it is at the same time one of the best decisions we have made. It has given Emma so much more quality of life, now that not everything is focused on eating. We practice eating daily and she loves to taste different smoothies and Nutella. That is her favorite!

Despite Emma’s challenges, she has amazing willpower. She loves to be active and she loves to improve her physical skills. At 5 months old she started physical therapy. We have the most amazing therapist coming to our house 2 times a week and the rest of the days we train on our own and Emma loves it. We do simple gymnastics and stretching exercises. Emma has already proven the diagnosis wrong. She has some head control and can sit in a couch for a short amount of time and recently we have started to put Emma in a standing trainer. This allows her to experience the world from a whole new viewpoint and her whole face lights up when she stands.

Having a child with special needs has been eye opening for us. The diagnosis has put everything in our lives into perspective: some problems now seem so small.
Emma is our little unicorn. We are so proud of her, and the things she has overcome already. She loves to cuddle, to take bubble baths, the wind in her hair and Nutella, and the simplicity in that is beautiful.