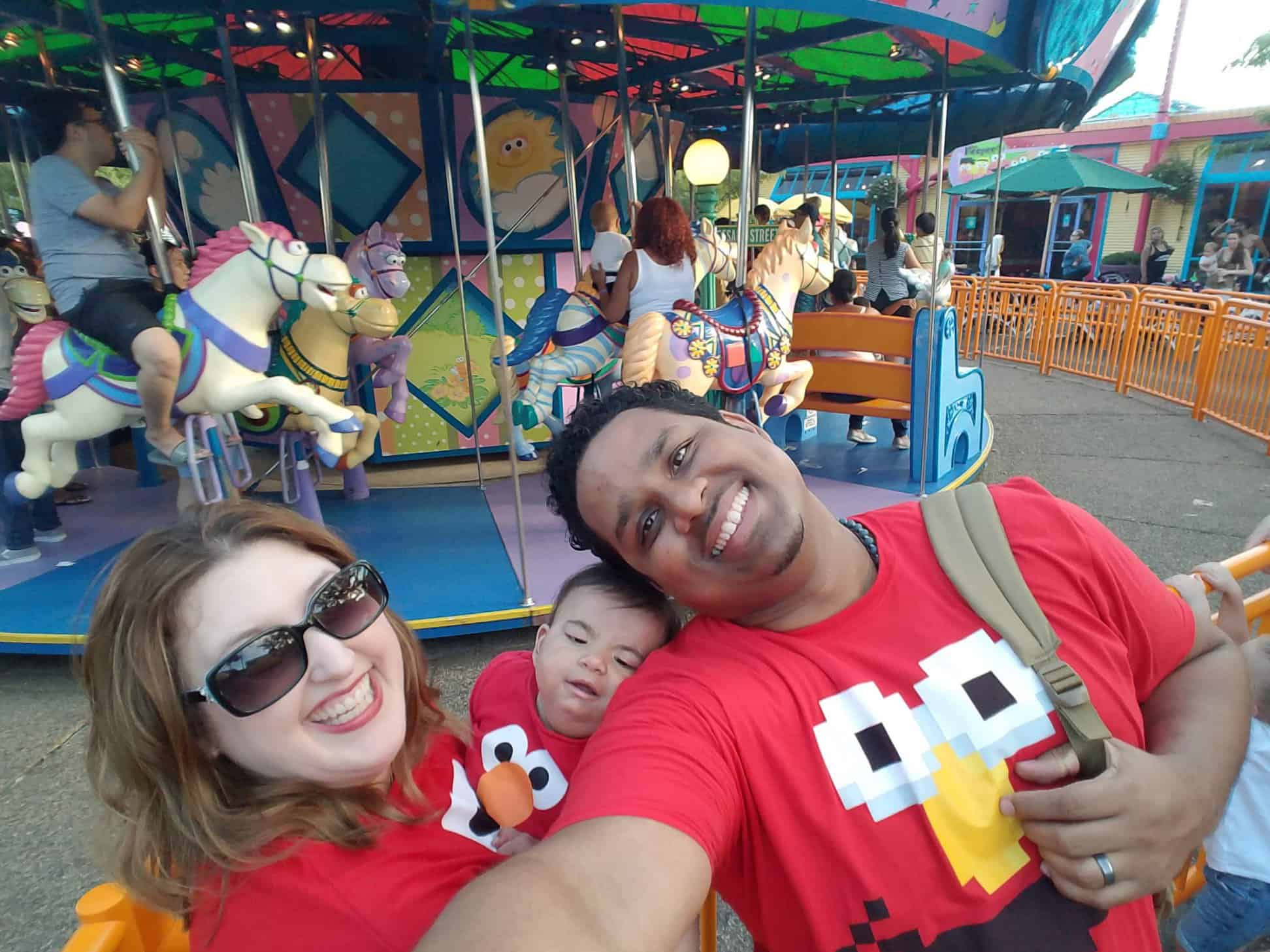 Aaron has been Aaron since our 20-week anatomic ultrasound. Soon after revealing that we were having a baby boy, our obstetrician explained that Aaron’s kidneys were not growing like they should be and referred us to a perinatologist immediately. We weren’t sure what was going to happen next, but my husband and I felt strongly that our baby needed a name before we went any further. Damian already liked the name Aaron, and when we found out its Hebrew meaning – “mountain of strength” – we felt that it was meant to be. We never imagined just how well Aaron would live up to his name.

The kidney issue was ultimately diagnosed as hydronephrosis (an enlargement, or swelling), which created an excess of amniotic fluid. This wasn’t really a problem until the 31-week ultrasound, when it mysteriously dropped to a dangerously low level and I was admitted to the hospital for 3 weeks of constant monitoring. By 34 weeks, the amount of amniotic fluid was so low that our doctor decided it would be more dangerous for Aaron to remain inside the womb than come out. She scheduled a C-section for the next morning. On September 19, 2017, our much wished for boy was born!

We knew there was a chance Aaron might have trouble breathing due to his prematurity. I was in a daze from the spinal block, so it didn’t register to me that Aaron didn’t cry when he was born. In our first picture as a family, Aaron is wrapped up tightly with a BiPAP mask attached to his tiny face. Damian went to the NICU with Aaron, signing the first of many scary medical release forms that we would see over the next two years.

Aaron stayed in the NICU for 101 days. He was intubated with ventilator support for the first month. Two days after he was born, Aaron had surgery to insert a nephrostomy tube into the ureter of his right kidney to relieve the swelling, which worked better than anyone expected. After all of the initial worrying about his kidneys, they turned out to be the least of our challenges! Aaron had his first set of seizures when he was only 3 weeks old. An MRI revealed that he had polymicrogyria, an abnormality of the brain that can result in epilepsy and varying degrees of developmental delays.

Thankfully Aaron’s seizures could be controlled with medicine, although it took about 7 months to figure out the combination of medications that worked best for him. By the time Aaron was breathing on his own and allowed to start eating by mouth, it was extremely difficult to get him to take anything. He would have streaks of doing well, increasing the amount of milk he would drink each day. But after 2 or 3 days, he would revert back to taking almost nothing. The doctors suggested a g-tube so that Aaron could learn to eat at his own pace. Initially this idea felt very unnatural to us, but as we learned more about it, we realized it was the safest and fastest way that we would be able to take Aaron home. Getting the g-tube was one of the best decisions we ever made, as it allowed Aaron to get the nutrition and medication that he would have never been able to take any other way.

On December 26, 2017, the results of Aaron’s whole exome sequencing genetic testing came back. The geneticist told us that Aaron had Schinzel-Giedion Syndrome (SGS). She began to rattle off a long list of symptoms that Aaron might acquire: developmental delays, epilepsy, hearing and vision loss, chronic kidney disease, cancer. I interrupted her to ask what Aaron’s life expectancy would be, which surprised my husband and myself – normally we always made a list of questions together in advance to ask the doctors. The room got very quiet as we were told that the life expectancy for children with SGS is usually between two to five years. We asked the doctors to leave the information packet with us and end the meeting. Then we closed the door and both of us cried.

Three days later, we were finally able to take Aaron home and we threw ourselves into learning how to take care of our special boy. We slept in shifts. We became experts at pulling meds and running tube feeds. We learned how to position Aaron so that he wouldn’t struggle as much from the near constant reflux and infant dyschezia (straining to poop). We started physical therapy and practiced “neck control” for as long as Aaron could handle it. Aaron did not respond to many toys or sounds. Slowly he began to enjoy the crunching sound that a stuffed giraffe would make when he squeezed it, and eventually was even able to hold a spoon for a few seconds at a time. He started tracking toys that had lights in them. He was a happy, smiley boy and rarely fussed or cried, unless he was experiencing break-through seizures.

At 9 months old, Aaron started having infantile spasms. Oh, how I hated them. The prednisolone that he was prescribed stopped the spasms, which was the most important thing, but Aaron slept for 20 hours a day during that month of taking this medicine and was drowsy the rest of the time. It broke our hearts to see his progress with holding and tracking objects completely regress. We were so relieved when this course of medicine was over and our happy boy came back to us.

We decided to take Aaron to Sesame Place for his first birthday. We were not sure how he would handle all of the noise and people, but he smiled all day! We held a big party with family and friends a week later, which he also enjoyed so much! The night after his party, Aaron began to scream whenever we laid him on his back. After a day of this, we took him to the pediatrician. There was swelling at the base of his spine, where he had what the doctor had previously referred to as a hemangioma (a bright red bumpy birthmark). The pediatrician was shocked to see how large this had grown in the few months since he had seen Aaron and sent us straight to the hospital for an MRI. After several screenings, it was determined that this mass was a primitive neuroectodermal tumor (PNET), an aggressively malignant cancer.

We had always known that cancer was a possibility from the SGS diagnosis, but this didn’t stop us from being devastated when it actually happened to Aaron. The tumor was removed a month later, followed by 2 weeks of daily radiation sessions. Aaron was so strong – he handled the repeated sedation required for the radiation amazingly well. After the radiation, you could tell that he felt better. But about a month later, he started to have trouble tolerating his feeds. Even at the slowest speed, he would vomit repeatedly, barely keeping anything down. During a screening to look for intestinal blockages, the x-ray happened to catch images of gravel-sized specks in Aaron’s lungs. The cancer had returned, spreading to his lungs as Ewing’s sarcomas.

We were determined to give Aaron the best quality of life we could. We started hospice services and were blessed to be given the kindest and most thoughtful doctor and nurse team. They made all of us feel better. With their help, we took Aaron on two more trips: to visit family in New York, and a long weekend at the beach in Ocean City, MD. We gave him tastes of ice cream and french fries and helped him put his feet in the Atlantic Ocean. He didn’t like the cold water, but he did enjoy wiggling his toes in the sand.

At the beginning of June 2019, an MRI showed that the tumor at the base of his spine had started to grow back. We did one more radiation session which helped for a few weeks, but we could see Aaron start to decline by the end of July. He was sleepy a lot of the time, as we were constantly having to increase his pain medication. It hurt him too much to sit up, so he was always flat on his back or on his side. To hold him, I would lay him flat on a pillow that I put across my lap. Only Damian was able to carry Aaron in a way that wouldn’t make him wince in pain. At the end of August, he contracted a fever that wouldn’t go away. We were sent to the hospital for an x-ray that ended up showing a severe case of pneumonia, complicated by the tumors that were continuing to grow and spread in his lungs.

We took Aaron home and our hospice team arrived within the hour to help make him comfortable. They expected that Aaron would pass away within a few days. Not knowing what would happen each night while we were asleep, before bed my husband would say his favorite prayer as a child and then I would read Aaron a book by Nancy Tillman – “Wherever You Are: My Love Will Find You”. Our strong boy rallied to live for two and a half more weeks. Aaron passed away on September 11, 2019, just eight days before his second birthday.

Aaron showed us how to love with all our hearts. His strength and sweet spirit make us want to be the best versions of ourselves for him. Our hearts hurt every single day, but we are glad that they do because it means that Aaron is still with us. We decided to finish Aaron’s Celebration of Life service by blowing bubbles to him in the sky. As we did, we told him, “Our love will find you, wherever you are!”